A Synaptic Static 5e guide helped me through my last run as a Sorcerer. Psychic is one of my favorite damage types as it connects the mental and physical – the same reason I like the Pokémon type.

Synaptic Static is a strong 5th-level enchantment spell that spellcasters can use to do major damage and confuse their targets. I love this spell because of the unique reactions that targets have to it.

Synaptic Static works for all four primary mages. You can cast it with one action and choose an area that is no more than 120 feet away from you. Creatures in a 20-foot radius then must make an Intelligence saving throw.

Because of this radius, the spell can reach players up to 130 feet away from you. If a player has less than two Intelligence, the spell will not affect them. Otherwise, the targets take 8d6 Psychic damage on a failed save and half as much on a successful one.

If targets fail, they have “muddled thoughts” for one minute. This is usually an entire combat phase. During that one minute, creatures affected reduce their attack rolls, ability rolls, and Constitution saving throws to maintain concentration by 1d6.

At the end of each turn, creatures can make an Intelligence saving throw to end the effects.

Synaptic Static came to be in Xanathar’s Guide to Everything. Psionic spells have existed since the 1st edition, but this particular spell wasn’t in any of the Player’s Handbooks but rather in Xanathar’s guide.

The Confusion Spell was one of the first mind-altering spells that one might call Psychic. But there weren’t many other 1st edition spells that rival the type of Psionic spells that we have in D&D 5e.

I remember using Telepathic Bond and Psychic Turmoil as a wannabee Psion Sorcerer in 3.5e. The Psychic abilities of spellcasters have grown by leaps and bounds since then.

It’s not always easy to imagine what specific spells and abilities look like whenever the description is so vague. Most spells describe what happens but not with a great picture painted.

The Sight of Shock

The spellcaster will point with their finger, and psychic energy will explode out of thin air, mushrooming into a dome. I always imagine that the psychic energy is either green or a nearly invisible purple-pink color.

The second that the spellcaster hits their targets with Synaptic Static, you can see their faces go blank. Those that succeed on the check will shake their heads at the harsh impact. Those that do not will be nearly – or literally – knocked off their feet, and they will look like they forgot where they are.

When You’re the Spellcaster

If you’re the spellcaster, then you will point your finger in the direction you want the psychic energy to explode. After you do this, then you must speak the magic word – which is non-disclosed.

You can make up any magic word that you want. Many spellcasters just say the name of their spell like an anime character would. But this is open to your interpretation. After you say it, your job is done.

When You’re the Target

If you happen to be in the dome of Synaptic Static – even if you’re an ally – you have to make an Intelligence saving throw. If you succeed, then you feel physical pain in your brain but likely recover.

If you fail, you not only feel an overwhelming physical pain in your head, but you also start losing track of your thoughts. You fumble around with your weapon and keep forgetting what you are doing.

I love finding ways to roleplay with each opportunity. You can make any spell unique by roleplaying the casting and the reaction if you are the target of Synaptic Static in D&D 5e.

If the target’s Intelligence is lower than 2, then Synaptic Static doesn’t work. This means that if the target has an Intelligence of 3 or 4, it works, but it probably doesn’t make much of a difference.

While the damage goes through as it normally would, the mental effects aren’t going to be noticeable. I’d say that you would think something is off but can’t really place what.

Sometimes, the target may be so overwhelmed that they give up. Confusion (the feeling, not the spell) can do crazy things to some people. They freeze in the moment or run around in circles.

This isn’t something most players will do because doing well in the fight is more important than roleplaying to them. However, if you fail the save anyway, it can be fun to roll with it.

If the target that is affected by Synaptic Static has barbaric tendencies, then they will likely charge the second that the confusion hits. Even if they miss their target due to the 1d6 taken from their roll, they will miss with passion.

Their entire party may roll their eyes or wince, but at least they’re making lemonade with their muddled brain waves.

The verbal element is up to you. Say anything you want. The somatic element is just you pointing at your target. If your DM plays in a logical roleplaying way, then it can be redirected.

Another player could bump you, or if you are uneasy (confused, nervous, etc.), then you may accidentally cast it into the wrong area. This is rare and only works if that’s the type of campaign you’re running.

Synaptic Static is not an easy spell to replace. But there are plenty of other spells that either confuse the target or do Psychic damage. My top ten favorite spells like Synaptic Static will give you plenty of options.

This spell is the original mind-bender. When you cast Confusion, the targets in the radius of where you cast the spell must make a Wisdom saving throw. If they fail, they can’t make any reactions.

The targets that fail also must roll 1d10 at the start of each of their turns, with the result choosing their behavior. The effect ends when they succeed on a Wisdom saving throw at the end of their turn.

If you’re a Sorcerer, Chaos Bolt is an amazing 1st level spell choice. You choose one creature within range and attack them with a mystery damage type – which can include Psychic.

Upon hit, they take 2d8 + 1d6 damage. The damage type is decided by random rolls. You must roll each d8 separately as they may have two different results. If the numbers are the same, the spell leaps to another target, and you roll again.

This intense Wizard spell allows you to create a manifestation of your target’s deepest fears. The target makes a Wisdom saving throw, and on a failed save, they become frightened.

At the end of each turn, they must make a Wisdom saving throw and take 4d10 psychic damage on each fail. When they succeed, the spell ends.

Feeblemind is another great mind-altering spell. Whenever you cast it, you tap into the mind of a creature and attempt to burst everything that makes them who they are.

They take 4d6 psychic damage and must make an Intelligence saving throw. Upon a failed save, their Intelligence and Charisma become 1. They can’t cast spells, or do almost anything else. The target can make a saving throw once every 30 days.

If you’re a Paladin, you too can do psychic damage. With a bonus action, you can ensure that the next time you hit a creature with a melee attack, you can add 4d6 psychic damage to the attack.

The target must also make a Wisdom saving throw. Upon a fail, they have disadvantage on attack rolls, ability checks, and reactions until the end of their next turn.

When you cast this spell, darkness fills a 60-foot-radius at a targeted point. A creature with darkvision can’t even see through this darkness. The only way to illuminate it is with 8th-level light creation spells.

When a creature starts its turn in the area, it must make a Wisdom saving throw. On a fail, they take 8d8 psychic damage. On a success, they take half that much.

You create an illusion that affects one creature. That creature must make an Intelligence saving throw, or the illusion affects them. The target can use its action to examine the illusion with an Investigation check against your DC.

If the target succeeds, then it doesn’t fall for the illusion. If it fails, it believes it and even takes 1d6 psychic damage from the illusion on each turn.

When you cast Mental Prison, you try to bind one creature. The target must make an Intelligence saving throw or take 5d10 psychic damage and see an illusionary threat in the area.

This is a simple spell for a 9th level. When you cast it, you choose up to ten creatures with an Intelligence of 3 or above. They must make an Intelligence saving throw. On a fail, they take 14d6 psychic damage and are stunned.

If they succeed, they take half the damage and are not stunned. If the target is stunned, then it can make an Intelligence saving throw to end the stun. If this blast happens to kill the creature, its head explodes.

You create illusions in the minds of creatures in a 30-foot-radius. They must each make a Wisdom saving throw. If they fail, they become frightened and must make a succeesful saving throw at the end of each turn or take 410 psychic damage.

Every Bard is familiar with this cantrip. To cast it, you start verbally harassing a creature. If they can hear you, they must succeed on a Wisdom saving throw or take 1d4 psychic damage and gain disadvantage on their next attack roll. 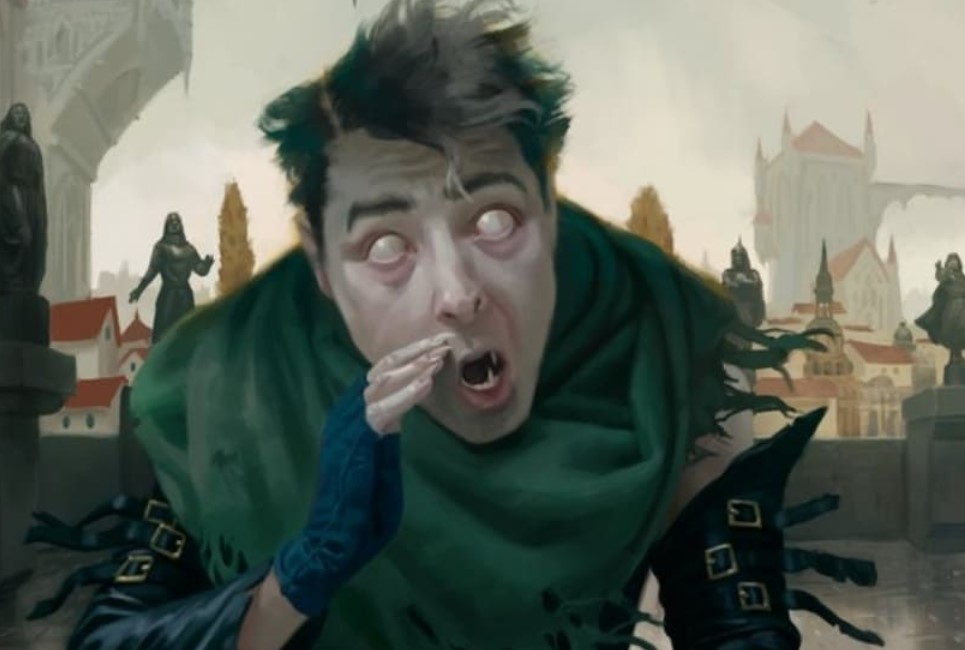 Another Bard ability that messes with people’s heads is Dissonant Whispers. When you cast it, one creature gets a major headache. They must make a Wisdom saving throw. If they fail, they take 3d6 psychic damage.

The target also must use its reaction to run away. If the target succeeds, they take half the damage and don’t have to move.

ANSWER: Yes. Synaptic static is a good spell that has decent damage. If it had damage alone and nothing else, it would be mediocre. But because it adds a confusion effect, it is good.

ANSWER: Usually, yes. If the undead creature has an intelligence of more than 2, then synaptic static will work on it. Any mind effect works on any creature unless either the ability or creature specifies otherwise.

QUESTION: IS A SAVING THROW AN ABILITY CHECK?

ANSWER: No. Synaptic static only works on attack and ability rolls, not saving throws. So, if you have to make a saving throw for any reason while under these effects, it will not take a debuff.

ANSWER: No. Neither lesser restoration nor greater restoration can cleanse synaptic static “Confusion.” there isn’t a clear way to do so with any standard ability, though homebrews may be able to.

QUESTION: CAN YOU DISPEL SYNAPTIC STATIC?

ANSWER: No. Synaptic static cannot be dispelled because it is cast instantly. There isn’t a reaction time that would allow for dispel magic to be cast. The confusion is also more of a daze that isn’t induced by magic.

Is Synaptic Static Worth It in 5e?

Synaptic Static is a cool ability. It does good damage, and it messes with people. I love psychic abilities, so I love Synaptic Static. Plenty of other abilities do more damage or have similar effects.