Modify Memory is the perfect D&D spell for you; you need to make sure it is locked and loaded and that you’re actually at a high enough level. Just make sure you don’t cast it on your fellow player characters without previously understanding if it’s all right with their player or not.

The Bottom Line: Modify Memory is a powerful enchantment spell that deserves its place on any Bard, Wizard, Trickery Cleric, or Archivist Artificer’s spell sheet.

Although commonly regarded as such, Modify Memory isn’t just for roleplaying purposes and can quickly become a dangerous tool in combat.

What is Modify Memory? 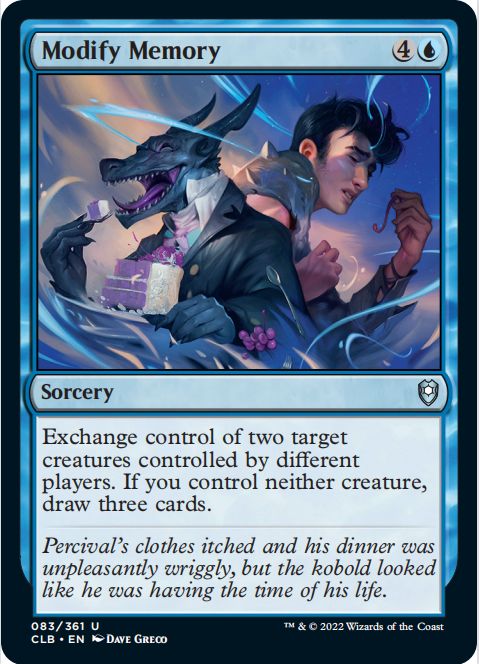 Modify Memory is a 5th-level enchantment spell requiring verbal and somatic components. As said in the official description, you are literally enchanting the mind of a creature to reshape its memories.

Requiring a casting time of 1 action, you can only target one creature at a time from 30 feet away with Modify Memory, regardless of how high of a spell slot you use.

The target is required to make a wisdom saving throw equal to or higher than your spell save DC. If you’re fighting the target, they will naturally have the advantage for their saving throw.

If the target fails their saving throw, they become charmed by you for up to one minute or as long as your concentration lasts. The target becomes incapacitated and unaware of their surroundings, but they can still hear you.

Cast at 5th level, you can modify the target’s memory from any point in the past 24 hours, but only in a 10-minute window.

When it comes to the actual modification of their memory, you can completely erase an event, recall an event with crystal clear clarity and precise details, change their recall of an event, or create something entirely new.

For this effect to take hold, you need to finish telling them the details before the spell ends, and they need to be able to understand your language.

The creature will naturally fill in the gaps and details in your description. However, regardless of whether or not your spell was completed, it doesn’t mean that the altered event will change how the creature acts, especially if it contradicts their natural inclinations, alignment, or beliefs.

Creatures will dismiss changed memories that are illogical or would make the creature believe something harmful is good. The only way for your target to truly relieve itself of its modified memory, if cast successfully, is through a Remove Curse or Greater Restoration spell.

Who Can Cast Modify Memory?

Sorry Druids and Sorcerers, you’ve had your fun, but Modify Memory isn’t a spell that you can get your hands on without a scroll.

Bards and Wizards, on the other hand, today is your lucky day. By default, you automatically gain access to the Modify Memory spell. For Clerics and Artificers, you can use Modify Memory, but you need to take a specific subclass to obtain it.

Archivist Artificers, on the other hand, thanks to Unearthed Arcana, gain access to the Modify Memory spell at level 17. Such a high level is a long way off for most players, but Modify Memory is undoubtedly worth the wait.

Is Modify Memory that Useful?

D&D is a game of luck mixed with strategy, and the dice decide your fate. Modify Memory, should it succeed, however, can completely change the outcome of characters’ interactions or who wins in a fight.

Although not traditionally seen as a combat spell, the charm effect that Modify Memory offers can take an enemy out of the mix for a full minute or 10 rounds of combat, which is longer than most fights go!

If you don’t want to hold your concentration for a full minute on this spell, all you need to do is get a little creative with it.

Getting Creative with it

I remember watching Critical Role Campaign 2, Episode 93, when one of the most legendary uses of Modify Memory was played out.

In a tedious situation with a Hag, Jester, one of the player characters and a Trickery Domain Cleric, completely changed the course of a situation with some Dust of Deliciousness, a cupcake, and a bit of cleverness.

The Dust of Deliciousness gave the Hag disadvantage on her wisdom saving throw, which gave Jester just enough edge for the spell to succeed.

Instead of giving up both of her hands to the Hag in exchange for a curse to be removed on another player character, she managed to convince the Hag that she had enjoyed Jester’s company so much that she agreed to end the curse.

As impressive as it was to see play out, we have to be honest, we can’t always whip out such insane plays, and often we need some guidance in our creative takes, so what can we do to have some fun with Modify Memory?

Making someone conveniently forget is one of the best uses for modifying memory.

You can easily use it to make a noble forget you said something rude or offensive, to make someone forget you made a love confession that may-or-may-not have been unrequited, or maybe to make a tavern keep forget about all of your debt.

Perhaps you would instead make someone remember something that never happened, however. Say you’re confronted with a group of bandits who wake you all up in the middle of the night. Nobody has had a full rest, so you’re all running on fumes.

In a last-ditch effort, Modify Memory can come to the rescue. It’s easy enough to cast it on a low-wisdom bandit, and all you have to do is convince him that there’s an unresolved fight going on between him and his fellow bandits.

Maybe they’re gaslighting him into thinking that there’s nothing wrong, perhaps they’re taking more of a cut of the loot than he’s getting, or maybe you’re a childhood friend who they’re out to kill for a contract that doesn’t pay nearly enough.

Not only does it take that bandit out of the combat order, but it might just turn him in your favor.

Maybe you just want to help your fellow players remember something. If you’ve gone to the Feywild, your characters with non-fey lineage likely forgot the entire journey shortly after exiting.

To help them keep their memories, remember the bonds built (or destroyed) during the trip, and just to have a unique experience that likely no other non-fey entity managed to keep hold of, you can use Modify Memory to bring back their recall of it with complete clarity and precision.

Question: Is there a Difference between a Creature and a Humanoid?

Answer: No, there isn’t. A creature encapsulates humanoid creatures, animals, beasts, and everything in between and beyond.
However, it is essential to note that Modify Memory will not work. “Creature” is the overarching term for anything big enough to be considered a CR0 or higher.

However, it is up to the discretion of your DM on whether or not a creature is sentient enough or not to be able to retain memories for long enough that Modify Memory would be adequate. If you have any concerns about using Modify Memory at your table, bring them up with your DM directly.

Question: How do I Figure Out My Spell Save DC?

Question: Should I Let My Players Use Modify Memory on Each Other?

Answer: As a DM myself, it’s important to talk this out with your players and set the boundaries together. Some players aren’t comfortable with another player manipulating their character like this, and some players are perfectly fine with it.
As the DM, you have the final say, but I urge you to sit down with your group or text them to figure out the boundary together.

Get Out there and Modify Some Memories

The use of Modify Memory can change with the situation, and it’s important to remember that it’s a flexible spell. You can use it to change a memory, erase it, create something entirely new, or just make someone remember something they had previously forgotten.

Allow yourself room to be flexible and if you have any concerns, address them directly with your DM and your fellow players. If it helps, make a list to call on when the time comes.