An Aasimar 5e guide is something I used a couple of years ago. However, I noticed a few things missing from the guides that I took a look at. This is why I’ve made a guide to fill in the gaps and help others who want to play an Aasimar or DMs who want to create an Aasimar NPC.

Whenever you join a new campaign, you have a lot of decisions to make. One of those decisions is deciding which D&D race to play. The Aasimar is a half-celestial, half-human breed that is often misunderstood. If you want something different and your DM gives you the green light, the Aasimar may be for you.

What is an Aasimar? 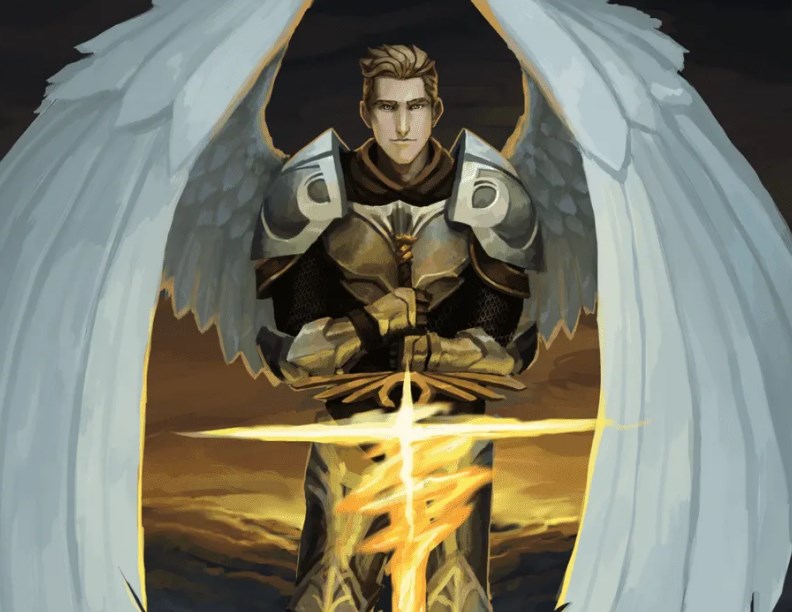 The 5e Aasimar is a celestial creature being with a special connection to a Deva. Most Aasimar are charismatic and intelligent, with a nearly visible spirituality about them. They were first introduced in Volo’s Guide to Monsters and later expanded upon in the new handbook, Mordenkainen Presents: Monsters of the Multiverse.

A couple of years ago, I was invited to a campaign with very few restrictions. So, I researched and decided to be an Aasimar Heart Mage/Empath. My inspiration was Avacyn from Magic: The Gathering. The class was a Homebrew that my Dungeon Master approved.

Choosing the Heart Mage/Empath was one of the best decisions I made. I was in love with using my emotions and the emotions of my opponents to control the battlefield. The concept wasn’t to use this in a manipulative way but in an empathetic way. I wanted to feel what my opponents and allies felt.

Anyway, I chose the Aasimar before I chose the D&D class because I loved angel-like races. If you’re interested, you can read my character bio/background here for inspiration. This is the story of Liv Saga.

Since I was born an Aasimar, touched by Mount Celestia, to humans, I never truly belonged to any one culture. My entire life, I have been given visions, prophecies, and feelings by my celestial connection, a deva angel named Zendaya. These have been my spiritual guide, but my cultural guide has been mixed, though Satyrs hold the strongest influence.

Seeing my love for culture, my human parents sent me away to live in a town of Satyrs when I was young. I spent a decade there and feel as if I now have Satyr blood running through me as well. I have no trouble connecting with anyone who has a conscience, and I try my best to understand everyone. It isn’t clear to me where my deep empathy comes from, whether it be my parents, my celestial connections, or my culture.

These days, I’ve found a group of people that I see as a melting pot of cultures to study and grow with. Although I’m not the most intelligent being, I have good judgment and seek to bring light to the world and those I come in contact with.” 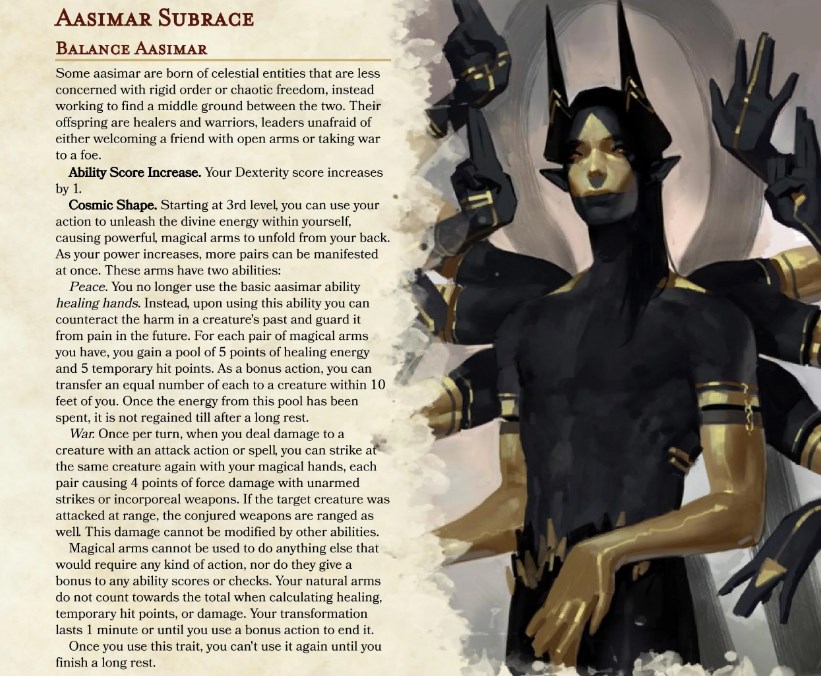 In Volo’s Guide to Monsters, there are subraces that the DM can choose for the Aasimar class. If you talk to your DM, you may be able to add a subrace as well. There are three choices for Aasimar subraces.

While it is possible to create your own subclass and have your DM okay it, I believe these are well-rounded as they are. Perhaps if you don’t fall in love with any of these three, you can use them and tweak your favorite.

If you play Protector Aasimar, you get a +1 to Wisdom. You also get a trait called Radiant Soul at 3rd level that allows you to unleash divine energy. When you activate this, your eyes glow, and you sprout wings. This can be cast once per long rest.

You are like this for 1 minute or until you end it as a bonus action. When Radiant Soul is active, you can fly at a rate of 30 feet. Plus, once on each of your turns, you can deal extra radiant damage – equal to your level – to one target when you deal damage to it with an attack or a magical spell.

The Scourge Aasimar gets a +1 to Constitution and an action called Radiant Consumption. With this, you can unleash the divine energy once per long rest, which lights you up like a 10,000 lumens lightbulb.

This lasts one minute and spreads for a 10-foot radius with bright light and another 10 feet with dim light. This ability does radiant damage – equal to half your level – to you and each creature within 10 feet of you on each turn. While active, you can also deal extra radiant damage – equal to your level – to one target when you deal damage to that target with an attack or a spell.

The Fallen Aasimar gets a +1 to Strength and an ability called Necrotic Shroud. Unlike the other subraces, this subrace involves Darkness rather than light. When cast, your eyes grow dark, and you gain non-flying skeletal wings. When cast, creatures within 10 feet of you must succeed on a Charisma saving throw (DC 8 + your proficiency bonus + your Charisma modifier.) If they fgail, they become frightened of you until the end of your next turn.

This lasts one minute and during that time, once on your turn, you can deal extra necrotic damage – equal to your level – to one target when you deal damage to it with an attack or a spell.

Although getting a cohesive class for your race can help, I tend to choose the class I want based on the roleplay aspect rather than the meta min-maxer route. If you’re a min-maxer, more power to you. But I prefer to play the way my heart leads me to play.

That said, there’s nothing wrong with trying to find the best class for your race. In this case, the Aasimar. While a homebrew class is my favorite, here are some of the best Aasimar classes that are canon. 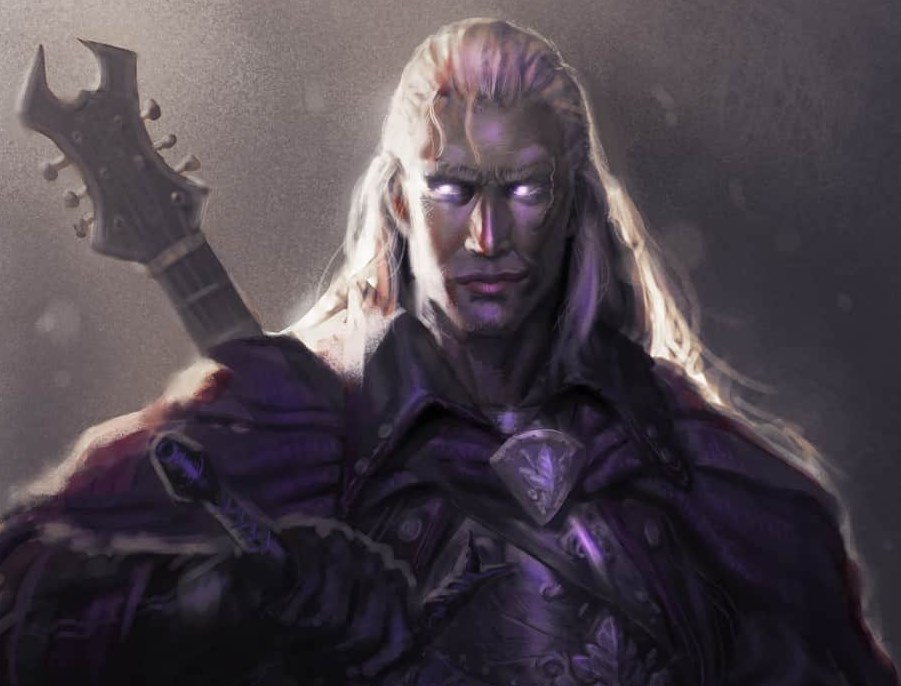 The Bard is an obvious choice for a few reasons. The Charisma boost is terrific, and so is the spellcasting cohesion of the two. Not to mention that any Bard would have a heyday with that flight.

I believe Paladin is a good choice because the Aasimar flight gives you movement that the Paladin lacks. It also adds some early game spellcasting which isn’t something the Paladin normally sees. Also, Aasimar look great in Paladin armor.

I think that any of the base spellcasters would work well with an Aasimar, but the Warlock is my favorite option in this case. After all, who doesn’t want a Deva and a Patron at the same time? The light and dark balancing each other out make this pairing an all-time favorite of mine.

The extra Healing Hands is extremely useful early on and works with most Cleric builds. The Cleric is often a magnet for necrotic damage, so having Celestial Resistance is a gamechanger.

Bonuses to Playing Aasimar in 5e

Now, some DMs will use a different version of the Aasimar, but you may be able to add any or all of these bonuses for your Aasimar. Just make sure you ask your DM before you do this.

If you aren’t into any of these bonuses, ask your DM if you may switch them out for something else of equal or lesser value. Most DMs won’t care if you customize your race and class as long as you talk to them about it first. 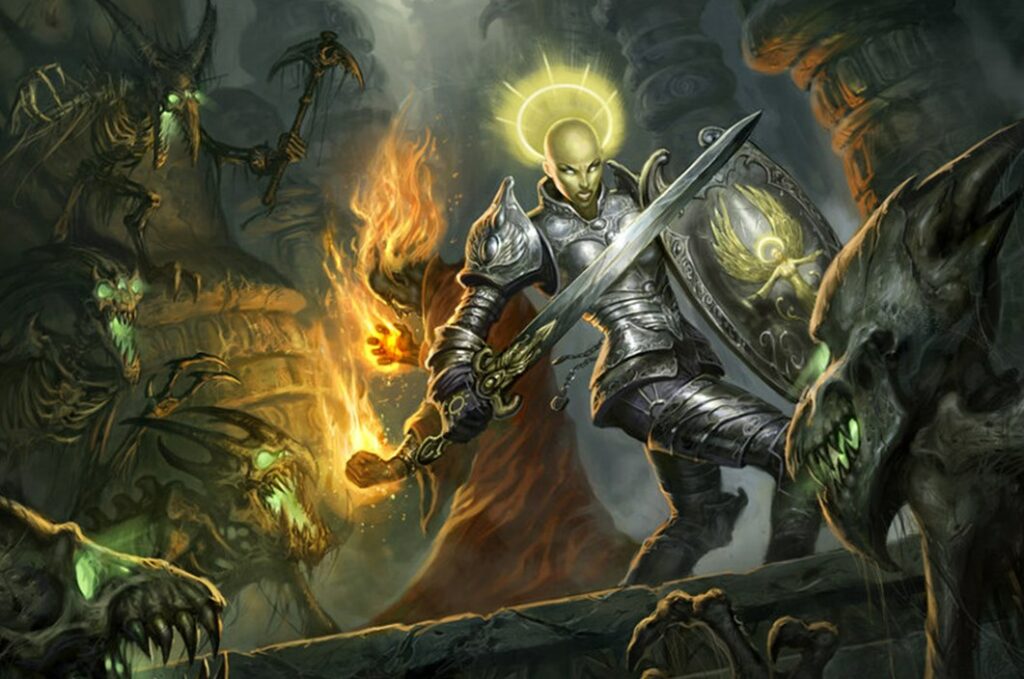 If you want to see Aasimar in action, take a look at a couple of examples from Critical Role. The stories of the Aasimar are different in Critical Role as the world is unique. There are two – well, three – famous Aasimar from the series.

These two young Aasimar boys are NPCs played by Matthew Mercer. They were freed from slavery by Vex’ahlia. They are temporarily put in the care of Lady Cassandra Johanna von Musel Klossowski de Rolo before Vex takes them to educate and care for them herself.

Yasha Nydoorin is an Aasamir Barbarian played by Ashley Johnson. Like any good Barbarian, she worships Kord. But because she does not know she is an Aasimar, she doesn’t have a Deva. Yasha is very introverted and is only talkative with her close friends.

As she is a player character, I will avoid spoilers and let you watch her in action. But I will say that she is an absolutely stunning character, and watching the entirety of Campaign 2 is worth it just to see her. Check for episodes with Ashley Johnson.

Name Ideas for an Aasimar 5e

While I usually pick something earthy and whimsical for a name, fantasy names are generally the first choice for others. Here are some names to get you started with naming your Aasimar.

Question: What is the Best Class for Aasimar?

Answer: Cleric, Paladin, and Bard are my top choices, but you can be any class you want. The Aasimar bonuses – especially the flight – are all appealing and would be a great addition to any class.

Question: What is a Good Backstory for an Aasimar 5e?

Answer: Take a look at some other Aasimar builds and read the stories others have crafted. Generally, Aasimars have an innate empathy, but they could also learn this human connection from something in their environment.

Answer: This is up to the DM. However, there is nothing written against using heavy armor on an Aasimar. The wings they sprout go through armor and are not tangible. So they are not affected.

Question: Are Aasimar in Other Tabletops and Video Games?

Answer: Aasimar call Wizards of the Coast their home as far as I know. Pathfinder has added an Aasimar, but aside from that DnD-inspired tabletop, I haven’t seen Aasimar anywhere else. The world outside of D&D calls this creature a Nephilim.

Getting Into Character and Being a Valuable Member of the Party

When I play Dungeons and Dragons, it’s important to me that I roleplay well and add value to the party. As an Aasimar, you can be the sole means of flight for the party, but that’s not where the benefits of having you around end.

Although it depends on the type of Aasimar you play, most Aasimar have good hearts due to their celestial blood. Few fall and take on dark traits, but more than likely, you chose an Aasimar so that you could offer compassion to your group. If your Bard is making a ruckus at a funeral, your Rogue is cutting purses, or your Barbarian won’t stop picking fights, you can be there for them. You are the heart and soul of the party, the connection to the celestial world.