A manticore 5e guide can help you better understand this abomination (not the fleshy D&D immortals). These creatures have been a favorite of gamers and mythology enthusiasts for decades.

In the D&D world, manticores are just as favored. Just the other day, my campaign ran into one at level one. We ended up getting away without fighting it, which is a blessing considering it would have wiped us. Yes, another devious DM.

This isn’t the first time that I have encountered a manticore. Because they have a relatively low challenge rating, they are great for early on in the campaign. This means they are quite prevalent in the D&D world.

Getting to Know the Manticore 5e

The manticore in D&D 5e is a magical beast and biological chimera of a lion, dragon, and even a human. If you’re only here for a hot minute, these are the most important facts about the manticore.

The manticore in DnD has been around since the first edition, but there isn’t a single edition that goes into depth on manticore tactics or lore. DMs have been using mythology and similar creatures to create their own lore.

Fighting a Manticore – What This Beast Does

To make the most of your manticore encounter, you must know how to fight it. If you’re a DM, you need to know how it fights. Because the manticore can fly, it can be difficult to take on.

Ranged weapons are a must when fighting the manticore, though if you don’t have anything ranged, then you can wait for it to swoop down and attack it with an opportunity attack.

As a Rogue main, I prefer to run and jump, trying my best to latch onto the manticore so I can attack it, distract it, and hope I can stick a landing should it knock me off.

From these ability scores, you can see that the manticore is naturally a strong physical fighter. It doesn’t have the best magical defenses, and according to its charisma, it isn’t as good at tricks as it may hope.

The stats that the manticore has is similar to what I imagine a Fighter may have. Of course, stats depend on how you decide these ability scores. But if you choose them, I liken the manticore stats to a Fighter.

The manticore generally taunts its prey, which is even easier now that it can speak Common. While it can speak with most prey, if hungry, it may skip the playing and chomp on its prey without remorse.

Manticores can fly unless their wings are injured heavily. So it spends much of its time flying around and swooping down to claw, bite, or tail whip its opponents – which are almost always prey. 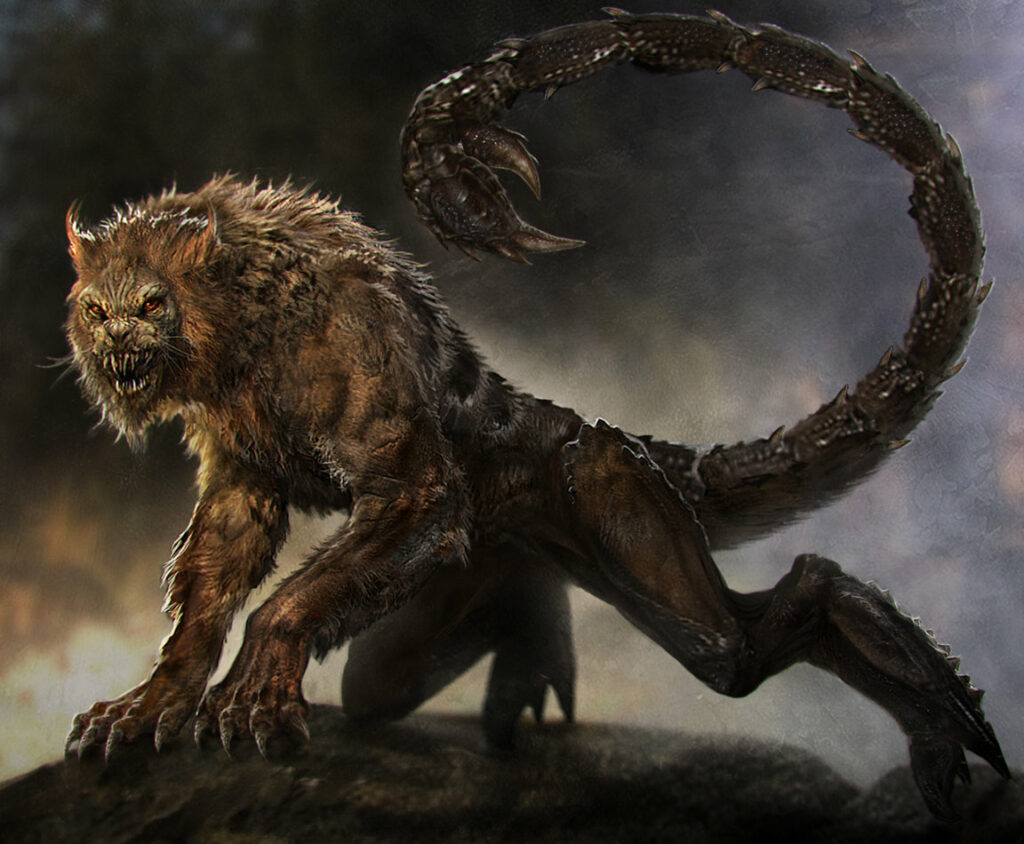 The Dungeons and Dragons manticore has been around since 1e. It has changed a bit throughout the editions, but the core of the creature, what it favors, and where it came from remain.

Historically, manticore had venom in their tails. Since they don’t do any acid or poison damage, I assume this has been bred out, or it’s not toxic anymore. However, this has never stopped them from wreaking havoc.

Time and time again, in different realms, the manticore has destroyed cities, often choosing those inhabited by peaceful groups of people. This monster isn’t called evil without basis.

Outside of the Realms

The manticore is an ancient creature who is renowned in multi-culture lore. The “real” manticore differs from the DnD manticore, but it has always been a man-eating creature with multiple animal parts.

It likely originated from the Caspian tiger, as the Greek word literally meant “man-eater.” Ancient writers would use the manticore as a symbol of the devil, a pure evil being.

There is a load of exciting lore in real life regarding the manticore, but I won’t go into detail, given I prefer to focus on the D&D version of the manticore. To be continued.

Life of a Manticore

In D&D, the manticore is a vicious predator that has spent centuries harassing passersby. They are known for eating adventurers alive and making alliances with the evilest of creatures.

What really makes them intimidating to me is their intelligence. Unlike most other evil beasts, the manticore is intelligent and can speak common. There’s something about being spoken to while being eaten that hits wrong.

Manticores are carnivorous. They eat meat, preferably enjoying the living flesh of their prey rather than buying it at the market. Though they’ll eat any creature, humans are their favorite.

I love this aspect because if you have a party with humans in it, the manticore will likely go for the humans first. If you have a half-elf, that would be the second choice for the manticore.

Manticore can survive nearly anywhere but prefers to make their lairs underground. They take pride in having a dreary and depressing home, perhaps to torment those it keeps captive until dinner.

When choosing a climate, they will opt for warmer areas. If there aren’t any caves nearby, then it will live in the lower mountains or marshes. The upper mountains will likely be too cold for its liking.

The manticore doesn’t have many predators, but it isn’t an apex predator. That said, most predators won’t hunt it down to eat it. Instead, it is adventures that tend to hunt manticore.

The adventures either hunt it down so it won’t harass nearby villages or to harvest its hide. Manticore hide is known to be valuable, especially for making furniture and cloaks.

The value of other parts depends on the region (or DM discretion). Someone with good bartering skills may convince a shopkeeper that the teeth or spikes normally go for millions.

The motives for the manticore aren’t well-known. Because it does play with its prey, it isn’t just out for dinner. Instead, it’s more human-like because it communicates and enjoys the chase.

They torment villages before they attack, to mess with their prey. They sometimes tell their prey that if they beg for their lives, then they will end their lives quickly. This is a perfect example of the games that they enjoy playing.

Because manticores are usually evil carnivores, it’s hard to imagine anything other than a prey vs. predator situation. However, a manticore can make an alliance with players.

This would require insane charisma and a DM that prefers a world of freedom without the restraints of enforcing orthodox standards. The only catch for manticore alliances is that the manticore must benefit.

The likelihood of a manticore forming a bond with someone just for the sake of friendship is so unlikely that even the most liberal DM probably wouldn’t allow it. Instead, you must find a reason.

This could be players helping the manticore find an endless supply of food, saving it from something more sinister, giving it treasures, or allowing it to torment villagers without stepping in.

Manticore 5e Vs Other Editions

I love progress, change, and adaptability. So taking a look at how monsters change through different editions interests me. The manticore is no stranger to visual change in D&D.

Changes to the ratio of species to the number of spikes or teeth the manticore has separated each edition’s version of it. I still can’t decide which version is my favorite, though I always prefer more lion than bat or reptile.

While the stats have changed little, the appearance of the manticore has changed. In the first edition, the manticore had rather demonic wings, a lion’s tail, and the head of an old Dwarf.

Biggest difference: in White Box: Monsters & Treasures, the manticore does have venomous spikes in its tail that are similar to porcupine quills. They also have their own language rather than just knowing Common.

In the second edition, the tail became more reptilian-like but remained the same color as the lion body. The head was all Dwarf at this point, with a full beard and rough human-like skin.

Biggest difference: the manticore specifically travels in groups of 1 to 4 in second edition. In a few books from 1st edition, the wings of a dragon are exchanged for the wings of a bat. That remains in 2nd edition.

3rd Edition – The Demon with Wings

The third edition depicts a unique version of the manticore, who loses most of its lion features in exchange for something more demonic. This is my least favorite version, primarily because I love the lion features.

Biggest difference: the manticore in 3e and 3.5e gets specific stats and abilities. The Monsters Manual gives the manticore dragon wings again and for the first time, it can speak Common – communicating with almost any race.

4th Edition and Beyond – Check Out the Mouth on 5e

Biggest difference: a few things change in 4e, but what always sticks out to be is the pure sinister vibe in the manticore grows. He gains rows of teeth like a shark and can be ridden – though it’s unlikely it would let you.

Question: Are All Manticores Evil?

Answer: Most manticores are evil, but they can be good if the DM allows it. In fact, if I were a DM, I would randomly make a sweet, timid creature like a manticore and see what the party does with it.

Answer: This is never specified, but I always imagine them sounding like Entei. This is an automatic thought because if I really think about it, there would be a less stoic and more sinister tone to their voices.

Question: How Smart Are Manticores?

Answer: Manticores have low intelligence scores, which may make them seem dumb. But they are smarter than most other similar creatures and the word “intelligent” is often thrown around when they are described.

Question: What is a Manticore’s Weakness?

Answer: Manticores don’t have a specific weakness, but they also don’t have resistance. They do have negative intelligence and charisma modifiers, which could help when those are the saving throws.

Answer: I have seen DMs make the manticore attacks with the tail poisonous or acid. This keeps it true to lore but strays from the Basic Rules version of the manticore. I prefer to add an element, keeping the RPG fun.

What Makes the Manticore Special in 5e?

While griffins and mermaids are great, the manticore changes the game by being born evil. I love a good redemption story, and I love finding a way to kill monsters guiltlessly.

So either way, the manticore offers what I want for a D&D campaign. I don’t have to worry about trespassing, killing the monster’s family, or stealing from it, warranting the monster’s attack.

When I attack this lion/dragon with a creepy old man’s face, I know that it’s for the greater good. Not to mention, I may find myself with a magical cloak that would benefit my party.