What is Dissonant Whispers?

This Dissonant Whispers 5e guide will share everything you need to know about Dissonant Whispers is a 1st level enchantment spell on the bard’s spell list in D&D 5e. When you cast the spell, you target one creature and whisper a discordant melody. They must make a Wisdom saving throw against your spell save DC.

The spell deals 3d6 psychic damage to the target, or half as much on a successful saving throw. Moreover, if the target fails the saving throw, they must use their reaction to run directly away from you. While they won’t run into an obviously dangerous area like off a cliff or into a pit, there is a lot that a creative player can do with this spell.

The spell takes 1 action and requires only verbal components. Since it only requires you to be able to speak, you can cast this spell with your hands full of sword, shield, or instrument. In one of my games, it became clear that this spell was a great way to target enemies even from a prison cell or with your hands in shackles. The description also states that only your target can hear the melody you whisper, so you could argue that no one else even knows that you’ve cast the spell.

The spell works as long as your target can hear you. You don’t even need to see your target to cast this spell. However, you do need a clear path to the target. If you are behind total cover, the spell will not be able to reach your target and will fail. Unfortunately, this means you cannot cast a spell on someone you hear talking in the next room of the dungeon.

When this spell is cast using higher-level spell slots, it deals an extra 1d6 damage for each higher level. The damage to the spell doesn’t scale very well but it’s a great use of a 1st level spell slot, especially in the 1st and 2nd tiers of play.

How to get Dissonant Whispers 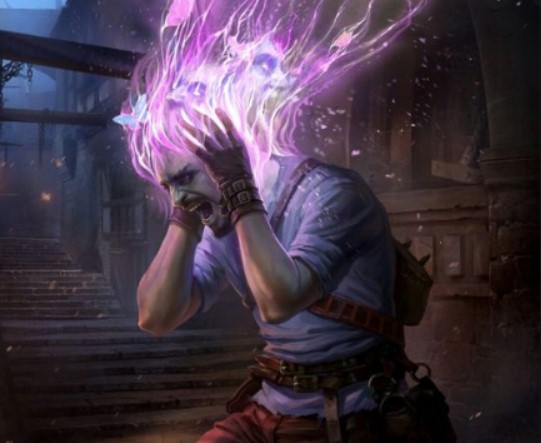 The clearest method to gain access to this spell is by taking at least one level as a bard. Since this is a 1st level spell, you get it as soon as you take any bard levels.

There are two subclasses with Dissonant Whispers on their spell list: the Aberrant Mind Sorcerer and The Great Old One Warlock. This is a great spell for a sorcerer to have as it is a great candidate for the Twinned Spell metamagic.

For a warlock, it’s a little less effective since as you level up, your spells are automatically cast at a higher level and you only have two spell slots until 11th level. I’ve found that casting this using a 5th level spell slot never feels like a good option when you can target someone with Hold Monster or any other powerful warlock spell.

You can also get access to this spell through the Rakdos Guild from Guildmaster’s Guide to Ravnica. This is setting-specific material and you would have to check with your DM to see if this is something present in your game.

Lastly, any character can get this spell through the feats Magic Initiate or Fey Touched. The former gives you two cantrips and one 1st level spell from a particular spell list. Bard is a great option to gain access to Vicious Mockery, something like Minor Illusion, and Dissonant Whispers. The massive downside to this feat is that you can only cast the 1st level spell once per day.

The far better option is the feat Fey Touched, which increases one of the mental ability scores and gives you access to Misty Step and one 1st level spell from the divination or enchantment schools. Dissonant Whispers qualifies since it is a 1st level enchantment spell. Moreover, you can cast both spells once without expending a spell slot and you can cast them using your own spell slots. 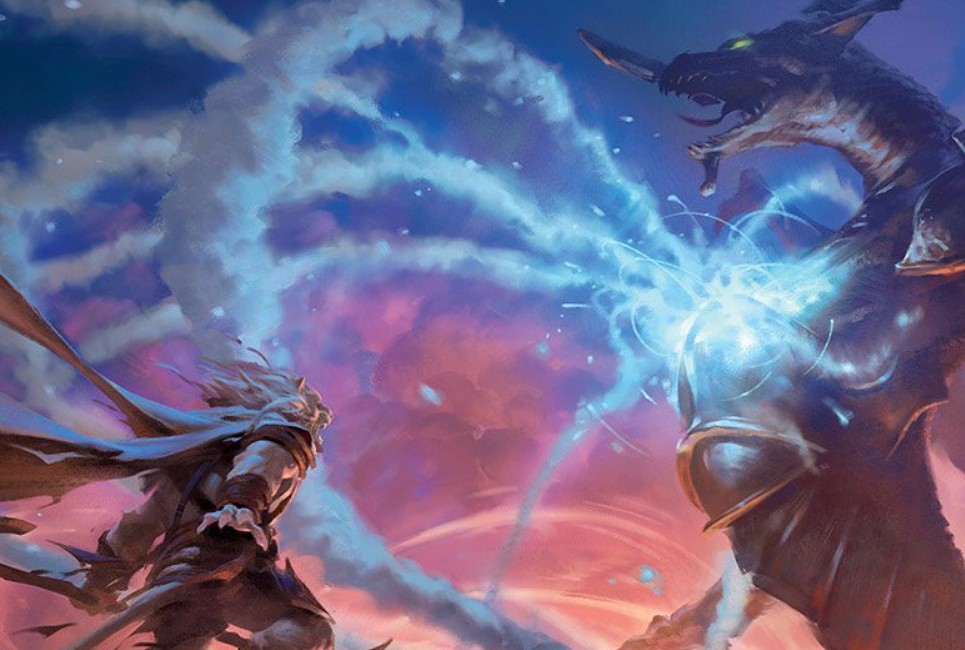 If you want to get this spell and use it effectively, there are some key interactions you need to be aware of. The spell reads that if the target fails their saving throw, they must use their reaction to move as far away from you as possible. While you can’t get them to run off a cliff, this movement provokes opportunity attacks from any allies they run past.

Most forced movement from sources like the Telekinetic or Crusher feats, or spells like Thunderwave occurs on a failed save. However, Dissonant Whispers tells us that the enemy uses their reaction to move away from us. Therefore this provokes opportunity attacks.

So, what to do with this information? It’s simple! Before you cast this spell, get into position so that you will send your enemy through the path of as many allies as possible. If you’re a melee character, get close to them before casting this spell and smack them with your sword as they leave.

Conversely, if an enemy has already used their reaction this round, they will not be able to move away from you. Think ahead if you want to cast this spell. Pay attention (yes, even when it’s not your turn!) to who has and who hasn’t used their reaction yet.

Remember that a character gets their reaction back at the start of their turn. If there’s a particular enemy you want to target with Dissonant Whispers, you only have to pay attention between their turn and yours.

A particularly advanced way of using this spell is to force an enemy to use their reaction. For example, a fight against mages creates a complex reaction economy on their part between casting Absorb Elements, Shield, and Counterspell: three fantastic defensive spells.

Either way, this is a good spell against enemy casters because it burns their reaction. Moreover, spellcasters with legendary resistance like liches are unlikely to use it on a measly 1st level spell. However, there is nothing in the rules to say that a spellcaster knows what spell you are casting before you do so a lich may not know you are casting a 1st level spell and cast Counterspell anyway.

An important aspect of Dissonant Whispers is the limitation that the enemy won’t run directly into obviously dangerous ground. This means that while you can cast Thunderwave to knock someone off the edge of a cliff, you can’t do the same with Dissonant Whispers.

However, you can have your enemy run directly into unobvious dangerous ground. Set up a simple trap found in the equipment list in the PHB, dig a hole and cover it with large ferns, or use an illusion to cover the danger that awaits. For example, your enemy won’t run off the edge of the cliff. They will instead, presumably, run until they reach the edge of the cliff. Cast Minor Illusion to create an extra piece of terrain that they think is real and they will indeed fall to their death.

Spike Growth specifies that creatures who don’t see the spell being cast must roll to see if they notice its dangerous ground. This implies that creatures who see the spell being cast can tell it’s dangerous. However, illusion spells often require people to investigate it to determine it’s an illusion. For Minor Illusion, a creature can physically interact with the image to determine it’s an illusion. In this case, their physical interaction is them falling through it and dying.

Kiting refers to the strategy of staying away from enemies by running away and using ranged attacks to avoid their attacks. Many monsters in D&D don’t have ranged attacks and if they do, they aren’t as powerful as their melee attacks.

Usually, this strategy relies on your enemy’s speed being less than yours so you can constantly move backward as they move forward. With Dissonant Whispers, you can force your enemy to move their speed away from you, and they can only move their speed to get back to where they started. Unless they can Dash as a bonus action, or increase their speed in some way, they will always stay away from you. This strategy works best against single enemies since you can’t keep a whole mob at bay in this way.

One aspect that makes this spell shine—even potentially at higher levels—is that the target makes a Wisdom saving throw and on a failure, they must start running away. The spell does not inflict any particular condition on your enemy. Some of the best spells in D&D are negated by a monster’s condition immunity.

For example, Hypnotic Pattern is potentially the most powerful 3rd level spell in the entire game. But the effect requires the enemy to be charmed. Therefore, any enemy immune to the charmed condition is immune to the effects of the spell.

Dissonant Whispers does not inflict the charmed, frightened, or any other condition. The only condition that is required is for the target to be able to hear you, which will always be the case unless the DM wants to mess with you.

Question: Does Dissonant Whispers cause fear?

Answer: No. This spell does not apply the frightened condition, meaning that it still works on creatures immune to fear.

Answer: Yes, because the target must use their reaction to move away from you, this movement provokes opportunity attacks.

Answer: No. The additional damage from Booming Blade is only triggered when the enemy willingly moves whereas Dissonant Whispers forces movement. However, your enemy is now at least 30 feet away from the battle and must use their movement to get back in, which will trigger the damage.

Question: What Book is Dissonant Whispers In?

Answer: Dissonant Whispers is found in the Player’s Handbook. The description of the spell can be found on page 234.

Question: Do you have to see a creature to cast Dissonant Whispers?

Answer: No, you don’t need to be able to see them. They only need to hear you. However, the target cannot be behind total cover such as a wall or other obstruction.

Dissonant Whispers is a 1st level enchantment spell from the bard’s spell list. While it is accessible through particular subclasses and feats, it remains an iconic bard spell. It lets you target a single creature, who must make a saving throw. On a failure, it takes 3d6 psychic damage and must use its reaction to run directly away from you. On a success, it still takes half the damage.

To get the most from this spell, consider positioning yourself so that the enemy runs directly away from you and other allies who want to stay out of melee. Since the enemy’s movement uses its reaction, it does trigger opportunity attacks from any creatures it runs past, adding to the potential damage done with a single 1st level spell.

Ethan Scaife
Ethan brings an extensive understanding of D&D game mechanics, storytelling, how to operate the game, and how to optimize playing! He's created many D&D game guides and will always provide the best advice, making sure to scour the source material and shares it all with us here!