This Fall Damage 5e guide can help diffuse arguments regarding Fall Damage in Dungeons and Dragons 5e. While some subjects in 5e have extensive rulings, there isn’t room for dispute; Fall Damage does not.

While there are a few official rulings that can help guide you with a stern hand, there are a few that are left unsaid. It’s a good idea to make these decisions before someone falls, so there aren’t any hard feelings.

The best thing about Dungeons and Dragons rulings is that they are open to tweaks from your D&D campaign. If you want to ensure every player dies at the hand of an enemy, then eliminate the chance of dying via fall damage.

Fall Damage – At A Glance

Fall Damage refers to how much damage a creature takes whenever it falls in D&D. A creature that falls takes 1d6 bludgeoning damage for every 10 feet that it falls, with a maximum damage of 20d6.

The creature is also knocked prone. If you have abilities that lessen fall damage or if you can talk the DM into a letting you use an acrobatics/athletics check, then you can prevent some of the damage.

The rules for fall damage are subject to change based on your DM’s decisions and what your party agrees on. If your campaign feels the need to adjust anything of these rules, then so be it.

What is Fall Damage in D&D 5e? 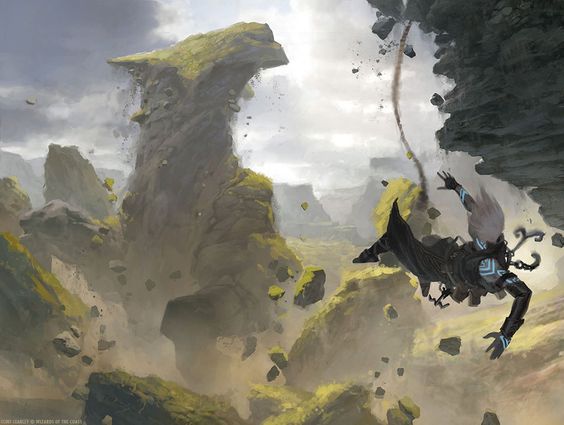 Fall Damage in any game can be a controversial subject. I recently watched a Viva La Dirt League video speaking on this subject. Does this game have fall damage? If it does, how severe can the damage be?

Well, Dungeons and Dragons have fall damage, and it can hurt. However, if you have enough health, the fall can’t kill you, which is strange considering everything else can.

If an Almiraj – the horned rabbit – attacks you enough times, it can kill you no matter how high your health. So the fact that Fall Damage can’t kill everyone is out of place, but that’s the way it is.

How to Calculate Fall Damage

Fall Damage is very straightforward in 5e. There isn’t a lot of info in the Player’s Handbook or Dungeon Master’s Guide regarding it. The bit of information that is provided is easy to follow.

A player that falls will take 1d6 bludgeoning damage for every 10 feet that it falls. The maximum damage that one can take from falling is 20d6. Unless the player avoids the damage, it will land prone as well.

The damage cap is quite strange, but it does prevent late-game players from dying from falling. This is a good thing because, after months invested in one character, it is heartbreaking to see them go.

How Fast Players Fall in 5e

The second that you fall, you will descend 500 feet. That is one turn. So on each of your turns, you will fall no more than 500 feet. If you start falling from 501 feet, then you spend one turn falling 500 feet.

On your next turn, you will fall that last foot to the ground. This makes it easy to calculate and doesn’t leave much room for disputes. If you start falling from 20 feet, then you fall to the ground, and then your turn ends.

If you want to make an exception and round the number, then feel free to. As long as the decision is made as a team – preferably before anyone falls – then it isn’t against the rules of your campaign.

When you are flying and get “knocked prone,” you start falling. Your movement speed is reduced to 0 during this time. Your DM can work with this since there aren’t any “official” rules for flying players.

Since the player can fly, it is completely fine if your DM allows you to “catch” yourself by flapping your wings. You can also take reduced damage if you can fly as long as the DM allows it.

For example, there could be a set rule that ensures flying creatures take 50% reduced damage from falling as long as they are conscious. Play around with your ruling since it isn’t set officially.

There are exceptions to every rule. The exceptions to falling are easy to follow because they have more to do with making the most out of a situation than a hard ruling. DMs can honor that.

Put on your creative cap when you fall; maybe you won’t need to use the damage cap. These ideas can help you take the least amount of damage possible, so roll with them.

You can either fall onto something that breaks your fall halfway through, or you can catch something with your hands. The way this is played depends on your ingenuity and the DM’s grace.

For example, as you fall, ask the DM if there are any trees or ledges that you can see. You may be able to slow yourself on one of them or catch one. This can reduce the damage you would take.

If someone catches you, you may take less damage. However, it may also cause them to take damage. If you’re a Gnome and there is a large Orc waiting for you, it is unlikely to hurt them.

But if the tables are turned, it could seriously injure the smaller player. These details can be the difference between life and death in a roleplaying game, so no detail is too small. That’s why creativity is so important.

This is completely up to the DM. If you can convince them to let you roll for the fall, that’s terrific. This would be a logical choice if you were to jump off of a cliff or if you were to catch yourself.

These checks aren’t always straightforward, and it’s easy to get them mixed up. But in short, Athletics is Strength-based, and Acrobatics is Dexterity-based.

You’d be more likely to use Acrobatics not to fall or land safely and Athletics to catch yourself or someone else.

Enhance Ability is a 2nd level transmutation spell with various uses. The use that can help falling creatures is Cat’s Grace. This ability gives the target advantage on Dexterity checks. It also ensures that the target doesn’t take damage when falling 20 feet or less.

This only works if the target isn’t Incapacitated. When you cast the spell as a 3rd Level or higher, you can target one additional creature for each slot level above 2nd. The ability uses concentration and can last up to an hour.

It’s easy to understand what Feather Fall is from the name alone. The 1st level transmutation requires a reaction to use. When you do use it, you can choose yourself or a creature within 60 feet of you.

When you activate it, you can choose up to five Falling Creatures within range. The rate of descent for these creatures slows to 60 feet per round until the spell ends. If the creature lands during the spell, then it doesn’t take fall damage, and it lands on its feet.

Monk is arguably the most Dextrous class. Starting at the 4th Level, a Monk can use their Reaction when they fall to reduce any fall damage taken by an amount equal to five times their Monk level.

The Dungeon Master’s Guide has a section that helps the DM come up with repercussions of falling. Since falling is different than other injuries, there are unique ways to punish reckless players.

If the player doesn’t take any damage, then they won’t suffer any injuries. But if they fall from 1000ft and don’t die, then they would be severely injured. The two primary injuries are simple and severe.

The simple injuries could be a sprain, broken limbs, or intense bruising. The serious injuries could be internal bleeding, severed organs, or something similar. The point is to make the injury appropriate and realistic.

If the player falls from ten feet and lands on their ankle, they won’t break their arm. But if they fall onto their side, a rib could puncture an organ and cause serious issues later on.

There is such a thing as “house rules” in Dungeons & Dragons, just like in any other game. House rules override official rules as long as it is agreed upon by the majority of party members and the DM.

So, if you decide ahead of time that there shouldn’t be a cap on fall damage, then take it off. If you decide that falling does less damage for any reason, then change the 1d6 to a 1d4.

Finally, if you want to be able to fall 1000 feet or only 200 feet each turn, then make it happen. The rules for anything in Dungeons and Dragons are a guideline.

The game heavily relies on the team making exceptions to have the most fun that they can. So work together. If you can’t make a decision together, then fall back on the original rules.

The original rules can’t cover homebrew races and classes. So if there is homebrew in your group that overrides fall damage, it’s up to the DM to decide if they will allow it.

It’s 100% okay if the DM allows homebrews or doesn’t. There shouldn’t be any resentment based on the DM’s decision as long as the DM is fair. The decision can cover the entire homebrew or certain aspects.

For example, let’s say that a player brings in a homebrew race that doesn’t take fall damage, can speak five languages, and also cannot be dazed. It’s okay to remove or nerf the fall damage buff and leave the others.

Question: Why is There a Fall Damage Cap in 5e?

Answer: I don’t know why there is a fall damage cap in 5e. Perhaps it would be so tragic to die from falling at a high level that Wizards of the Coast had mercy on veteran players.

Question: What Happens if You Fall On Someone in DnD 5e?

Answer: If you fall on someone, they would likely have to make a success on a Dexterity saving throw or split the damage between the two characters. The details, of course, are up to the DM.

Question: Do Falling Objects Do Damage in 5e?

Answer: Yes. The exact damage a falling object does is up to the DM. The height that it falls from doesn’t matter as much as the weight, shape, and size of the object. The DM uses his judgment.

Question: Can You Die From Falling in Dungeons and Dragons?

Question: What Happens When You Fall in Water in DnD?

Answer: So far, all of the rules about falling into water are the same as falling on the ground. However, there is room to adjust this to a certain height or with certain saving throws.

In the end, the DM controls 90% of what happens when you fall. There is a hard cap of 20d6 that the DM can’t do much about. But if outside sources interfere, then you may be done for.

For example, if you drop 200 feet and hit a ledge, then keep falling about 100 feet, you will take more damage. In this case, you’d take a total of 30d6 damage. So there are ways to get around the cap.

That said, the likelihood of dying from a fall – if you are cautious – is highly unlikely. There are freak accidents that can occur. But try to stay away from ridiculous heights, and you may get your hero’s death.